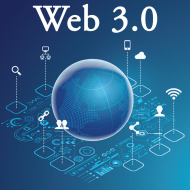 The term Web 3.0, also known as the Semantic Web, describes sites wherein the computers will be generated raw data on their own without direct user interaction.

Web 3.0 is considered as the next logical step in the evolution of the Internet and Web technologies.

Initially, the Internet is confined within the physical walls of the computer,┬á┬á┬á but┬á┬á┬á as more and more devices such as smartphones, cars and other household appliances become connected to the web, the Internet will be┬á omnipresent and could be┬á utilized┬á in the most efficient manner.

These systems can answer the questions posed by the users, because the application can think on its own and find┬á the most┬á probable answer,┬á depending on the context, to the query submitted by the user.

In this way, Web 3.0 can also be described as a ÔÇťmachine to userÔÇŁ standard in the internet.

This allows the data and information to be readily intercepted by machines, so that the machines are able to take contextual decisions on their ownby finding, combining and acting upon relevant information on the web.