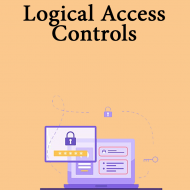 Logical access controls are implemented to protect the aforesaid resources from the below mentioned exposures:

Data diddling involves the change of data before or as they are entered into the system. A limited technical knowledge is required to data diddle and the worst part with this is that it occurs before computer security can protect data.

Slicing of small amounts of money from computerized transaction or account.

It is a software that allows unauthorized access (back door entry) to system without going through normal login procedure.

They occur in many environments where data can be moved asynchronously across telecommunication lines. Numerous transmissions must wait for the clearance of the line before data being transmitted. Data that are waiting to be transmitted are liable to unauthorized access called asynchronous attack. These attacks are hard to detect because they are usually very small pin like insertions. There are many forms of asynchronous attacks.

The sender uses an encryption algorithm with a key to convertÂ theÂ originalÂ message called the Clear text into Cipher text.

This is decrypted at the receiving end.

The call- back device requires the user to enter a password and then the system breaksÂ  the connection. If the caller is authorized,Â  the call back deviceÂ  dials the callerâ€™sÂ  numberÂ  to establish a new connection.

This limits access only from authorized terminals or telephone numbers and prevents an intruder masquerading as a legitimate user.

However, in distributed systems, resources may be controlled by the end-user. Resource owners in this setting may be granted discretionary access control, which allows them to grant access privileges to other users.

For example, the controller who is owner of the general ledger grants read only privilege to the budgeting department while accounts payable manager is granted both read and write permission to the ledger.

Application and Monitoring System Access Control: Some of the steps are as follows: