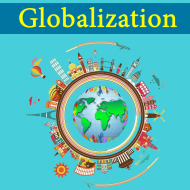 Minimizes the importance of national boundaries, sources, raises capital and markets wherever it can do the job best. The concept of geography has become history. It is the rapid expansion of communication and transportation which has reduced distances and generated an everlasting interdependence among people and nations at all levels.

Globalization can be explained in different perspective.

In perspective of developing company

In perspective of companies

In simple economic terms, globalization refers to the process of integration of the world into a huge market. Such unification calls for removal of all trade barriers among countries.