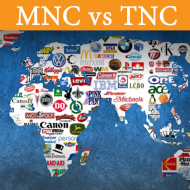 The company which has gone global is called either a multinational corporation (MNC) or a transnational company (TNC).

MNC and TNC are those of corporations or companies that operate in more than one country, gains in marketing the product, research and development, product diversification, financial strength and cost benefit, human resources competency, logistic supports, accounting standard which is not available in purely domestic company.

MNC is more focused on adapting their products and services to each individual local market. They do not share R&D, Decision making power to each foreign country where they do business. MNC have clearly identifiable home country and head office, there is centralized management system and structure.

A further development, perhaps, will be the super-national enterprise. It is worldwide enterprise chartered by a substantially non-political international body such as WTO, IMF or World Bank.

With its integrative view, it should be able to draw the economic world closer together. It could serve all nations without being especially attached to anyone of them.