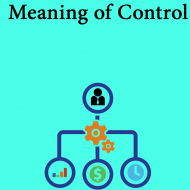 The primary objectives of the organizational control is to operationalized the business in systematic ways. The objective of control is to be specific, measurable, achievable, related and time bound.

Mechanism to control is a managerial function to monitoring and measuring the performance of the system.

Mechanism of control is a system for

Mechanism for feedback and correction

There are three types of Control

The thrust of operational control is on individual tasks or transactions as against total or more aggregative management functions. For example, procuring specific items for inventory is a matter of operational control, in contrast to inventory management as a whole. One of the tests that can be applied to identify operational control areas is that there should be a clear-cut and somewhat measurable relationship between inputs and outputs which could be predetermined or estimated with least uncertainty. For example EOQ is used for controlling a specific inventory.

When compared with operational control, management control is more inclusive and more aggregative, in the sense of embracing the integrated activities of a complete department, division or even entire organization instead of small units.

According to Schendel and Hofer ŌĆ£Strategic control focuses on the dual questions of whether: (a) the strategy is being implemented as planned; and (b) the results produced by the strategy are those intended.ŌĆØ

There is often a time gap between the stages of strategy formulation and its implementation. A strategy might be affected on account of changes in internal and external environments of organization. There is a need for warning systems to track a strategy as it is being implemented. Strategic control is the process of evaluating strategy as it is formulated and implemented. It is directed towards identifying problems and changes in premises and making necessary adjustments

There are four types of strategic control as follows:

A strategy is formed on the basis of certain assumptions or premises about the complex and turbulent organizational environment. Over a period of time these premises may not remain valid. Premise control is a tool for systematic and continuous monitoring of the environment to verify the validity and accuracy of the premises on which the strategy has been built.

It is neither feasible nor desirable to control all types of premises in the same manner. Different premises may require different amount of control. Thus, managers are required to select those premises that are likely to change and would severely impact the functioning of the organization and its strategy.