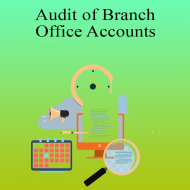 As per section 128(1) of the Companies Act, 2013, every company shall prepare and keep at its registered office books of account and other relevant books and papers and financial statement for every financial year which give a true and fair view of the state of the affairs of the company, including that ofĀ  its branch office or offices, if any, and explain the transactions effected both at the registered office and its branches .

It may be noted that all or any of the books of account aforesaid and other relevant papers may be kept at such other place in India as the Board of Directors may decide and where such a decision is taken, the company shall, within 7 days thereof, file with the Registrar a notice in writing giving the full address of that other place.

Students may also note that the company may keep such books of account or other relevant papers in electronic mode in such manner as may be prescribed.

Where a company has a branch office, the accounts of that office shall be audited either by the auditor appointed for the company (herein referred to as the company's auditor) under this Act or by any other person qualified for appointment as an auditor of the company under this Act and appointed as such under section 139, or

It may be noted that the branch auditor shall prepare a report on the accounts of the branch examined by him and send it to the auditor of the company who shall deal with it in his report in such manner as he considers necessary.