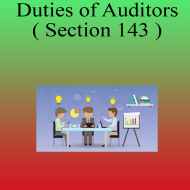 These are the duties of auditor -

unless he has any special comments to make on any of the items referred to therein. If he is satisfied as a result of the inquiries, he has no further duty to report that he is so satisfied. Therefore, it could be said that the auditor should make a report to the members in case he finds answer to any of these matters in adverse.

Duty to Sign the Audit Report: As per section 145 of the Companies Act, 2013, the person appointed as an auditor of the company shall sign the auditor's report or sign or certify any other document of the company, in accordance with the provisions of section 141(2).

Section 141(2) of the Companies Act, 2013 states that where a firm including a limited liability partnership is appointed as an auditor of a company, only the partners who are chartered accountants shall be authorised to act and sign on behalf of the firm.

The qualifications, observations or comments on financial transactions or matters, which have any adverse effect on the functioning of the company mentioned in the auditor's report shall be read before the company in general meeting.

Duty to comply with Auditing Standards: Every auditor shall comply with the auditing standards. Further, the Central Government may prescribe the standards of auditing as recommended by the Institute of Chartered Accountants of India, in consultation with and after examination of the recommendations made by the National Financial Reporting Authority.

However, it may be noted that the reporting requirement on adequacy of internal financial controls (IFCs) with reference to financial statements shall not be applicable to a private company which is aâ€“

One person company; or

Company having turnover less than ` 50 crore as per latest audited financial statement and having aggregate borrowings from banks or financial institutions or any body corporate at any point of time during the financial year less than ` 25 crore.

[Notes: (1) Students may note that the auditor is also required to report on certain additional matters specified under CARO, 2016 which is discussed later under Para 10 Reporting under Companies (Auditorâ€™s Report) Order, 2016.

5.Duty to report on frauds:

Reporting to the Central Government- As per section 143(12) of the Companies Act, 2013 read with Rule 13 of the Companies (Audit and Auditors) Rules, 2014, if an auditor of a company in the course of the performance of his duties as auditor, has reason toÂ  believeÂ  thatÂ  an offence of fraud, which involves or is expected to involve individually an amount of ` 1 crore or above, is being or has been committed in the company by its officers or employees, the auditor shall report the matter to the Central Government within such time and in such manner as prescribed.

Reporting to the Audit Committee or Board- In case of a fraud involving lesser than the specified amount [i.e. less than ` 1 crore], the auditor shall report the matter toÂ  the audit committee constituted under section 177Â  orÂ  to the Board in other cases within such time and in such manner as prescribed.

Disclosure in the Board's Report: The companies, whose auditors have reported frauds under to the audit committee or the Board, but not reported to the Central Government, shall disclose the details about such frauds in the Board's report in such manner as prescribed.

no duty to which an auditor of a company may be subject to shall be regarded as having been contravened by reason of his reporting the matter above if it is done in good faith.

The auditor is also required to report under Companies (Auditorâ€™s Report) Order, 2016 [CARO, 2016], whether any fraud by the company or any fraud on the Company by its officers or employees has been noticed or reported during the year. If yes, the nature and the amount involved is to be indicated.